Together with landowners, Oulun Energia is considering new uses for areas where peat production is ceasing. In addition to forestry, there is growing interest in various wetland solutions that restore nature. Wind and solar power farms, meanwhile, are interesting due to being renewable forms of energy and providing the possibility to achieve faster returns than forestry.

How the peat bogs are used in the future is ultimately up to the landowners themselves. In the Oulu region, the most popular choice is to turn the peat production areas into forestry land. The second most common use is for game or as fields. An increasing number of choices are also made with responsibility and the biodiversity of nature in mind, as there is a desire to turn peat bogs into meadows and wetlands.

Wetlands make the scenery more beautiful, but at the same time, they naturally filter soil impurities and thus reduce the eutrophication of other bodies of water. With the formation of wetlands, insects, birds, game animals, reindeer, and other living organisms can find their way to the area—the same effect can be seen in meadows.

“In the coming years, we are considering implementing bird counts in areas that have been taken out of peat production. We would like to monitor if certain species have returned or if new species have arrived, but this is still in the works," says Minna Granroth, resource manager at Turveruukki.

Landowners have also become interested in income from renewable energy production. There is interest in establishing solar or wind power farms, Granroth says.

“In some areas, wind and solar power farms may be a good option if the areas want to generate revenue faster than through traditional forestry, as the owner of land used for forestry may have to wait 15–20 years before the area produces any income after peat production. Of course, investments must also be made in different energy-producing farms,” Minna Granroth states.

The life cycle of a solar energy farm is about 30 years. According to Tommi Kantola, Production Director of Oulun Energia, establishing a solar power plant requires, among other things, proximity to power lines and a sufficiently flat surface.

“For example, ground-mounted solar panels in about one and a half hectares of land may generate slightly less than one million kilowatt hours of energy per year.”

The restoration of peat bogs usually takes two to four years. This summer, Turveruukki, which supplies peat to Oulun Energia, will return about a third of its thirty peat bogs under restoration back to landowners for after-use.

Reducing the use of peat and making the shift to noncombustible renewable energies is an effective means of controlling greenhouse gas emissions. Turveruukki still has forty-two peat bogs in production, all of which will be put into other uses within about five years. 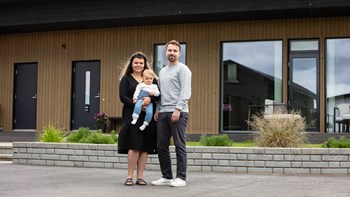 District heating is a sustainable solution in many ways

The same factors are at play in choosing your energy solution for the home as they are for larger buildings. Antti Välitalo relies on district heating both at work and at home. 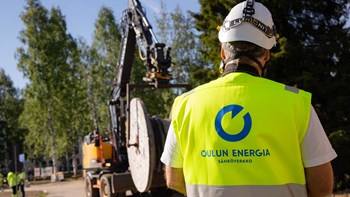 Don’t let a crisis situation take you by surprise

Oulun Energia Sähköverkko Oy is prepared for disruptions and extraordinary circumstances by making plans and taking preventative measures. With cooperation, we can ensure that the most critical functions still work even if electricity is temporarily unavailable.

When hit by an unexpectedly large electricity bill that puts a strain on your finances, the most important thing is to quickly draw up a new payment plan. Negotiating a payment arrangement can be a hit to your self-esteem, but from an economic point of view it makes sense. In negotiations, an understanding payment advisor takes each customer’s overall debt situation into account. The savings from making a payment arrangement can turn out to be manifold compared to paying the collection and payment default fees of an electricity bill.
Read all